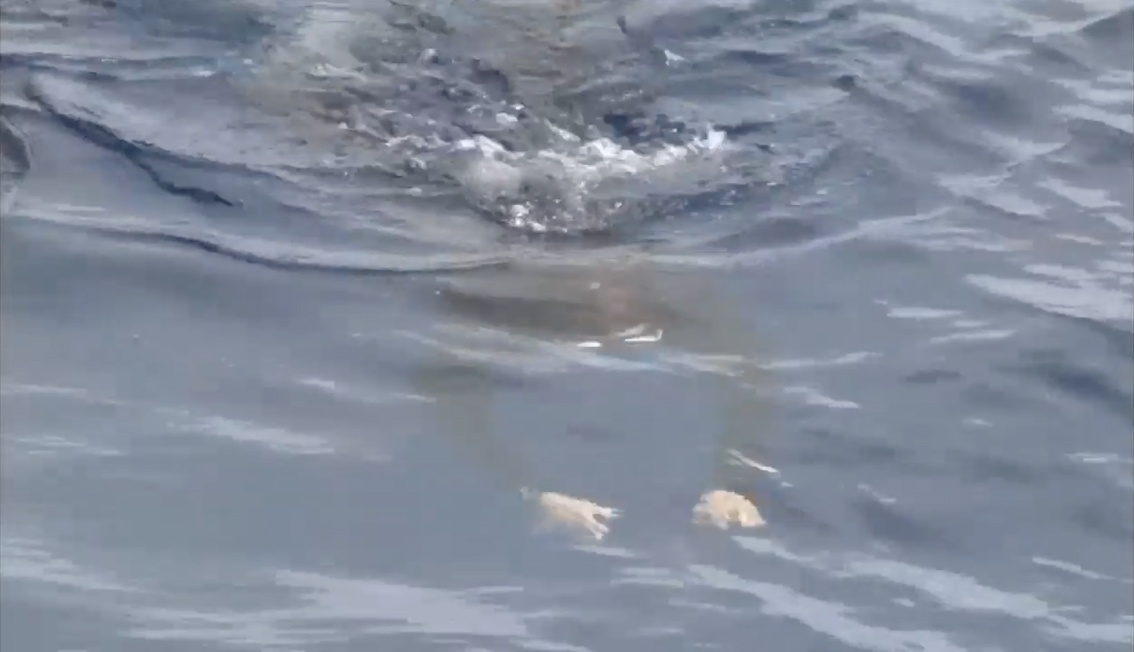 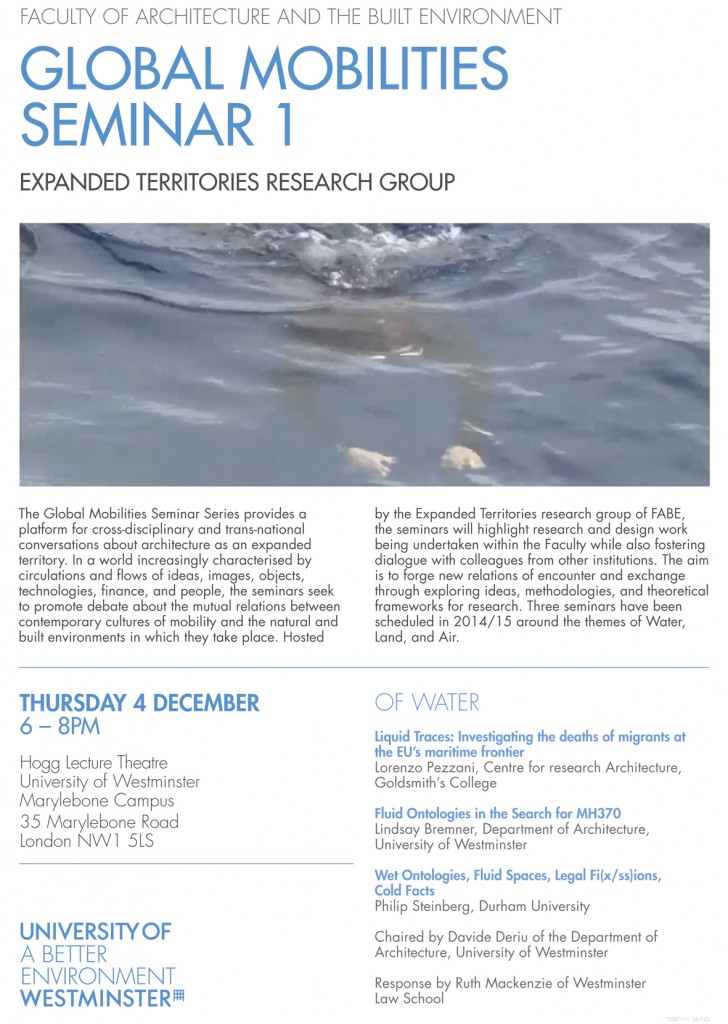 The Global Mobilities Seminar Series provides a platform for cross-disciplinary and trans-national conversations about architecture as an expanded territory. In a world increasingly characterised by circulations and flows of ideas, images, objects, technologies, finance, and people, the seminars seek to promote debate about the mutual relations between contemporary cultures of mobility and the natural and built environments in which they take place. Hosted by the Expanded Territories research group of FABE, the seminars will highlight research and design work being undertaken within the Faculty while also fostering dialogue with colleagues from other institutions. The aim is to forge new relations of encounter and exchange through exploring ideas, methodologies, and theoretical frameworks for research. Three seminars have been scheduled in 2014/15 around the themes of Water, Land, and Air.

Liquid Traces: Investigating the deaths of migrants at the EU’s maritime frontier

Because any trace on water seems to be immediately dissolved by currents, the oceans have long been associated with a permanent present that resists any writing of history. Their liquid expanse has equally represented a challenge for governance: the impossibility of drawing stable boundaries in ever changing waters has led to imagine the seas as a space of absolute freedom and flow. This presentation takes a radically different approach and seeks to reconceptualise the sea as a material field of struggle. I will talk about the policies and practices by which the Mediterranean Sea has been recast as the Southern border of the EU, causing over 16.500 documented deaths over the last 20 years. A complex sensing apparatus is fundamental to this form of governance that combines the division of maritime spaces and the control of movement, and instrumentalises the partial, overlapping, and “elastic” nature of maritime jurisdictions and international law. And yet those very remote sensing devices, when used against the grain, can provide evidence of the violence perpetrated against migrants at sea and help to challenge the regime of visibility imposed on this contested area.

Lorenzo Pezzani is an architect based in London. Since 2011, he has been working on Forensic Oceanography, a project that critically investigates the militarized border regime in the Mediterranean Sea using imaging, mapping, and modelling technologies. In the frame of this project, he co-founded the WatchTheMed platform. He is currently completing his PhD at the Centre for Research Architecture (Goldsmiths College), and is a Teaching Fellow at the Bartlett School of Architecture (UCL).

Fluid Ontologies in the Search for MH370

It is very rare, if ever, that the Southern Indian Ocean has come into view with the intensity that it did than during the search for missing Malaysian Airways Flight MH370. In this presentation, I will examine the tenuous clues as to where the airplane might have gone after it disappeared from radar screens – seven satellite pings, hundreds of pieces of floating debris and six underwater sonic recordings – as apertures into this vast ocean space, the remote sensing technologies used to probe it and the modes of governing it. Despite failing in their forensic objectives vis-à-vis the airplane, the clues led into the ocean and gave it witness in new ways. The power and agency of a little known, intensely mobile ocean come into play, stretching to the limit and ultimately confounding all attempts to call it to account for the airplane’s disappearance.

Lindsay Bremner is Director of Architectural Research at the University of Westminster in London. She is an award-winning architect and writer. Prior to joining Westminster, she was head of the architecture departments at Temple University in Philadelphia and the University of the Witwatersrand in Johannesburg. Her two current research projects, ‘Folded Ocean’ and ‘Geo-architecture,’ are investigating sites in the Indian Ocean world being transformed by global mobility, trans-nationalism and climate change, and relationships between architecture, geology and politics.

This paper expands on recent attempts to destabilise the static, bordered, and linear framings that typify human geographical studies of place, territory, and time and that provide geopolitical underpinning for attempts to order space through legal ‘fixions’ (the fixing of space), ‘fissions’ (the division of space) and ‘fictions’ (the attribution of ‘properties’ to discrete spaces). In a world conceptualised as open, immanent, and ever-becoming, scholars have turned away from these notions of fixity towards concepts of fluidity and flow, and, in so doing, they have developed networked, “flat” ontologies. Recent attempts have gone further, challenging the horizontalism inherent in such approaches by opening up a vertical world of volume. Even in these approaches, however, the vertical element of volume is all too often abstract and dematerialised; the emphasis on materiality that is typically used to rectify this excess of abstraction tends to reproduce a sense of matter as fixed and grounded; and the temporality that is employed to reintroduce “motion” to matter has the unintended effect of signalling a periodised sense of time that minimises the chaotic underpinnings and experiences of place. As an alternative, this paper proposes a ‘wet ontology’ wherein the voluminous, haptic, dynamic, and mobile nature of space is promoted as a ‘foundation’ for the political organisation of space, rather than being denigrated as its nemesis. However, this reframing of the relationship between space, time, matter, politics, and law poses new hurdles, as well as exciting possibilities, and these are reviewed with reference to current work developing legal and regulatory systems for icy environments in the Arctic.

Philip Steinberg is Professor of Political Geography and Director of IBRU: the Centre for Borders Research at Durham University, where he also convenes the Project on Indeterminate and Changing Environments: Law, the Anthropocene, and the World (the ICE LAW Project). He is the author or editor of four books, including The Social Construction of the Ocean (Cambridge, 2001), Managing the Infosphere (Temple, 2008), What Is a City? (Georgia, 2008), and, most recently, Contesting the Arctic: Politics and Imaginaries in the Circumpolar North, which will be published at the end of 2014 by I.B. Tauris. He also is associate editor of Political Geography. Much work to be presented at Westminster is derived from a project undertaken collaboratively with Kimberley Peters, which is being published as ‘Wet Ontologies, Fluid Dynamics: Adding Depth to Volume through Oceanic Thinking’ (Environment and Planning D: Society & Space, forthcoming).

Davide Deriu is Senior Lecturer in Architecture at the University of Westminster, where he teaches history/theory and leads the MA Architecture. Besides his work as an educator, he is an experienced writer, editor and curator. He has published on a wide range of subjects, from aerial visuality to underground space, and is particularly interested in cross-fertilising architecture with other fields and disciplines (e.g. geography, film and photography studies, literary criticism, travel cultures). Davide has recently started a new project, ‘Vertigo in the City’, funded by the Wellcome Trust.