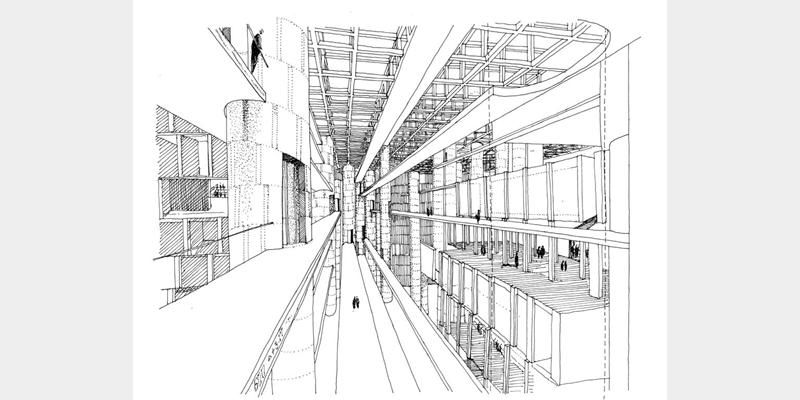 Nina Shen-Poblete (ds14, 2012) was selected from twenty-five entries as one of six architecture graduates in BD’s Class of 2012. This award forms part of BD’s Architect of the Year Awards.

Shen-Poblete’s ‘Knowledge Barter’ is a model of an educational system based on a free market utopia. She proposes a 100 x 100 x 100m cube for a new University of Thurrock. Located on the site of a disused rubber factory, in what was once the Bata shoe empire in East Tilbury, the scheme is the result of an obsessive inquiry into abstract linear representation.The project emerged out of a drawing experiment in which the students produced a series of studies from an existing image, developing an abstract language of line — “to translate simple marks upon the picture plane into code relational lines”, in the words of tutor Gordon Shrigley.

Shen-Poblete took Cy Twombly’s ‘Cold Stream’ drawing and developed a series of compositions using the binary code 1 and 0, deploying the results as a generative grid across the site.

“Inspired by the status of knowledge in the post-modern age, as described in Jean-François Lyotard’s The Postmodern Condition, the proposed University is a hypothetical model of an educational institution based on a free market utopia, where corporations are the new knowledge patrons, and performativity, trading and competition lie at the heart of knowledge production,” writes Shen-Poblete.

The jury for the award comprised a range of architects, academics and critics: Cany Ash, director of Ash Sakula; Peter Carl, professor at London Metropolitan University; Kester Rattenbury, tutor and reader at the University of Westminster; and Juan Lago-Novás Domingo, Director of the masters course in Architectural Management and Design at IE School of Architecture in Madrid.   Peter Carl described the project as “the best of the ironic-manic propositions, carried out with resolute consistency and rendered in an arid axonometric style befitting its inspiration from Lyotard and Cy Twombly”.

The six chosen graduates will be invited to compete for a fully funded year-long scholarship for a master’s business programme at the IE School of Architecture & Design in Madrid. The winner will be announced at the Architect of the Year Awards on December 4 at The Brewery, London.