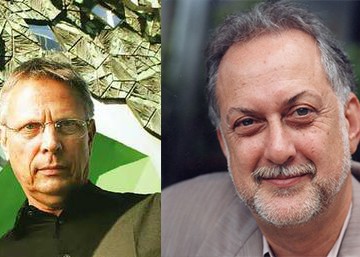 The Department of Architecture is pleased to announce that the University has just appointed Leon van Schaik and Michael Sorkin as Visiting Professors for three years.

Professor Leon van Schaik is Innovation Professor of Architecture at RMIT, Melbourne, Australia. He has taught at the AA and at Harvard and served on numerous boards, including the Australian Centre for Contemporary Art, the Australian Housing and Research Institute and the UIA Science Committee. At RMIT, van Schaik pioneered the innovative practice-based Masters and PHD programs for architects and designers whose work already demonstrates mastery in their field. This has been run successfully for over 20 years and now includes a European version run in partnership with Sint-Lucas Visual Arts in Ghent, Belguim. The Department of Architecture at Westminster wishes to partner with RMIT and Sint-Lucas in offering the European version of the PHD by practice and in developing joint research grant proposals. One such grant proposal, ADAPT-r (Architecture, Design and Art Practice Training – research) has recently been approved by the Marie Curie Foundation. Professor van Schaik’s appointment will build on the relationship developed during his previous period as a Visiting Professor, during which time he provided valuable support to the development of the department’s research profile. This was acknowledged by the previous director of architectural research, Murray Fraser, in his submission to the RAE in 2008.

Professor Michael Sorkin is an award winning architect and Distinguished Professor of Architecture who has taught at numerous schools of architecture around the world, including the Academy of Fine Arts in Vienna, the AA, and Yale and Harvard universities. His books include The Next Jerusalem, After the World Trade Center, Twenty Minutes in Manhattan and All Over the Map. He is currently Director of the Graduate Urban Design Program at the City College of New York. Sorkin is also the Chair of the New York Institute for Urban Design, a non-profit organisation that provides a forum for debate about contemporary urban planning, development and design and runs his own urban design practice, Michael Sorkin Studio. Association with Professor Sorkin will benefit the school by exposure of staff and students to his extensive architecture and urban design practice in Asia and South East Asia, and in debates about sustainable cities. This will be of benefit to a number of the disciplines in the school, including architecture, urban design and planning. An annual public lecture will promote the School’s public profile. Professor Sorkin’s appointment will support the school’s global strategy to build networks and partnerships in Asia and South East Asia.