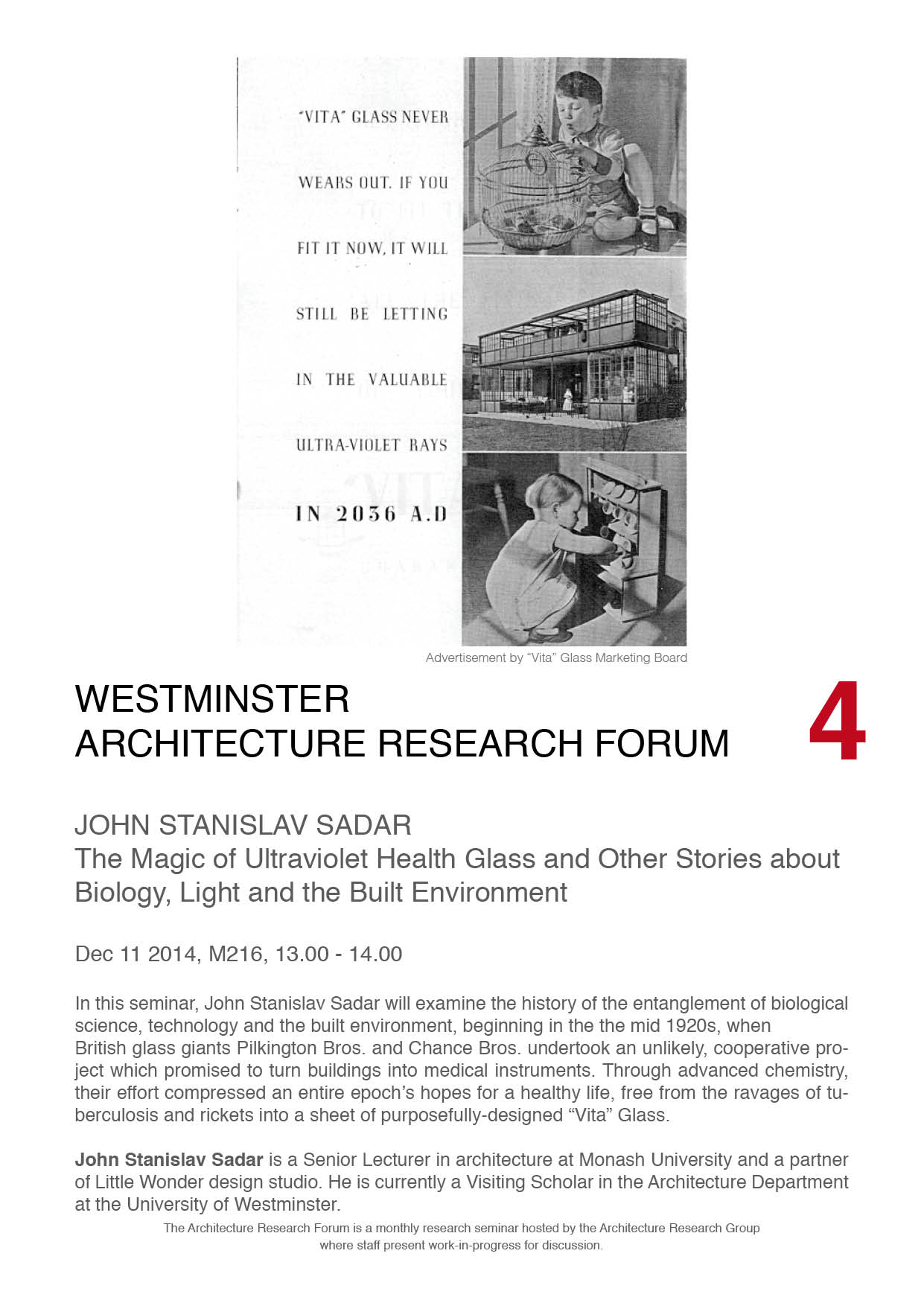 The Magic of Ultraviolet Health Glass, and Other Stories about Biology, Light and the Built Environment

Biological science, technology and the built environment have a long intertwined history. The story starts In the mid 1920s, when British glass giants Pilkington Bros. and Chance Bros. undertook an unlikely, cooperative project which promised to turn buildings into medical instruments. Through advanced chemistry, their effort compressed an entire epoch’s hopes for a healthy life, free from the ravages of tuberculosis and rickets into a sheet of purposefully-designed “Vita” Glass. To communicate its invisible, ultraviolet performance, the “Vita” Glass Marketing Board embarked on a campaign to engineer need. With its assertion of “Health Through Your Windows,” the Board’s campaign promised a condition inside the building that would surpass that of the outdoors. Alongside Willis Carrier’s air conditioning and Matthew Luckiesh’s artificial sunlight, “Vita” Glass offered the beneficence of the outdoors and the convenience of modern technology in producing a complete artificial climate. While client testimonials extolled its virtues of invisible weather control and effortless health effects, Swiss émigré William Lescaze put ultraviolet health glass to work in his speculative 1928 design for “An American Country House in 1938.” For anthropologist Marcel Mauss, the claims of effortlessness, invisibility, and weather control were nothing less than incantations of magical rites, and in communicating them, the “Vita” Glass Marketing Board conjured magical bodies. The relationship between light, biology and the built environment vis-à-vis our ideals for a healthy life continues through to the present day, in our era of green technologies, LEDs and micro controllers, as embodied in recent and current projects: “Living Buildings,” “Fog Garden,” and a forthcoming project investigating light and circadian cycles.

John Stanislav Sadar is a Senior Lecturer in architecture at Monash University and a partner of Little Wonder design studio. He studied architecture at McGill University, in Montreal; Aalto University, in Helsinki; and the University of Pennsylvania, in Philadelphia. He worked as design and project architect in the firms of architectsAlliance and Montgomery Sisam Architects in Toronto, and Sadar in Vuga arhitekti in Ljubljana. He is interested in how the effects of our material technologies mediate the relationship between our bodies and the environment.