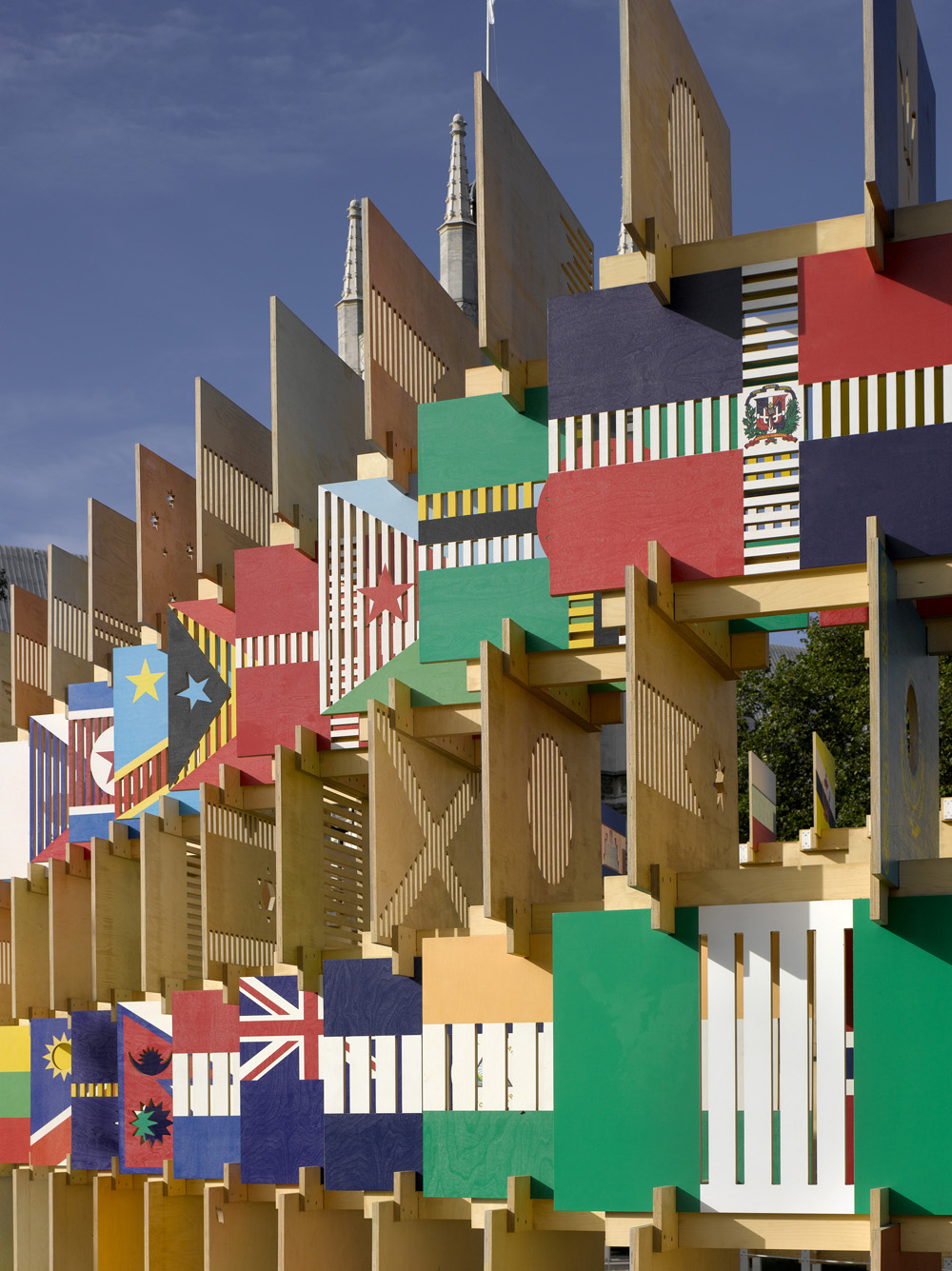 Two members of EXP, Anthony Boulanger of AY Architects and Gabby Shawcross of Studio of Cinematic Architecture and three University of Westminster student teams won commissions in the Mayor of London’s ‘Wonder Series of Incredible Installations’ competition, for small works aimed at dressing up the city during the Olympic and Paralympic Games. The students teams were three of nine  chosen from submissions by four London Architecture Schools: the University of Westminster, the Bartlett at University College London, London Metropolitan University and Central St Martins.

AY Architects’ ‘House of Flags’ consisted of 206 plywood panels depicting the flags of the countries of the world, stacked into a colourful house of hards in Parliament Square. This formed a freestanding, 17m long x 8m wide x 4.5m high structure, stabilized by pre-cast foundation blocks. It was demountable and entirely reconfigurable and, as a kind of large three-dimensional jigsaw puzzle, can be reinstalled in new configurations elsewhere. ‘House of Flags’ collated politics, graphics and architecture into a single assemblage.

The flags were arranged in alphabetical order, never touching or intersecting, and carefully considered so that certain cut-outs are not offensive or seen from the back.

AY Architects worked with the Flag Institute, the world’s leading research and documentation center for flag information, to determine how the design of the panels and their connections could respect these protocols. The panels were CNC cut and the majority of them had cut-outs of symbols and perforations within them. The top panels were more perforated and light whereas the bottom ones were more solid and heavy. They were stacked with alternating orientation from row to row and were joined by eight different types of laminated connections. The graphic of each flag was printed directly onto one side of the plywood panels, with the back of each flag panel left with the natural material finish. This meant that the exterior of the installation was a complex configuration of colored graphics, while the interior was unified by the natural finish of the plywood panels.

During the day the structure worked as a shadow modulator with the shadows of its perforations shifting from east to west. When the sunlight was sharp, the vibrancy of the color-printed panels were reflected on the natural plywood panels next to them. At night the structure was lit from within, glowing as an inhabited ‘house’ and showing the emblem cut-outs as silhouetted figures.

For more, go to AY Architects

Katharine Heron, Head of the Department of Architecture said: “This project has given our students the fantastic chance to see their designs come to life and displayed proudly in the heart of London. Those visiting London this summer will be able to interact with and admire the projects that combine adaptability and functionality with creativity; elements that are key components to modern day architecture. We are thrilled that designs from our students were chosen to showcase the diversity of the architecture work from the University of Westminster. The high standard of design on show here is testament to the hard work and tenacity of our students as well as the support and assistance that they receive from their tutors and fabricators.”

The cabinet was placed in the Shell Centre forecourt on Belvedere Rd, London, SE1 7NA, slightly elevated from the paving on a plinth that created a shadow line that and gave it the appearance of a large piece of outdoor furniture. By day, the cabinet opened and the seats were moved onto the forecourt, providing seating and forming social gathering spaces. The empty cabinet framed views of the ever-changing skyline of the city. By night, the miniature buildings were stored inside the cabinet and made an interactive backdrop to the street.As people passed by, got close and peered in, individual buildings were momentarily illuminated by motion sensitive spot lights. This was captured on film throughout the Olympic Games and is available for viewing on Studio of Cinematic Architecture’s web site. To view  ‘A Day in the Life of the London Dresser’ click here.

For more, go to SOCA

‘Streetscape Carousels’ by Chloë Leen, Theodore Molloy and Steve Wilkinson of Studio PUP also engaged playfully with London’s architecture. The carousels were a series of 5 small, room–scale pavilions scattered around London. They were located at St Stephen’s Chapel, West Norwood Cemetery; Borough Market; Portobello Green; World’s End Place and Kentish Town Library. Each carousel related uniquely to its area, showcasing its character through a display of its architecture: contemporary and historic buildings alongside landmarks of local importance, reflecting cultural and physical diversity and eclecticism. The selected architectures of different scales were collaged together in silhouetted form, and wrapped around the inside of a cylindrical drum, which was raised on legs.

By turning a crank, the layer of silhouettes was made to rotate so that the entire panorama could be viewed from one position. At night, a central light illuminated the silhouettes from the inside, projecting the streetscape in light and shadow onto its surroundings.

The Carousels capture a snapshot of London’s continually transforming skyline by creating a physical record of the city at its seminal moment of hosting the Games. These collages of London, presented in an engaging, magical and captivating manner elevated normal and everyday street scenes into moments of wonder.

For more go to PUP

‘Aurora’ by  Jamie Parson and Lemma Redda took the plastic hula hoop and explored how it could be manipulated as a struc­tural element to create an equally playful form. 1500 translucent hula-hoops were suspended from trees in London’s Victoria Park. By day Aurora’s  hoops appeared to hang effortlessly amongst the tree’s canopy.

At night, a lighting strategy allowed the draping pavilion to assert its presence and animate the space with varying colour projections.

It was supported on a parametric structural frame designed by engineers Price and Myers, made of steel rods hung from steel cables. The hula-hoops were cable-tied to the steel rods, shifting the bearing angle of the hoops to create a wave-like effect across its surface. Once dismantled, the hoops were distributed to schools and youth clubs throughout the country, giving the scheme its own legacy – a prime concern of the London Olympics.