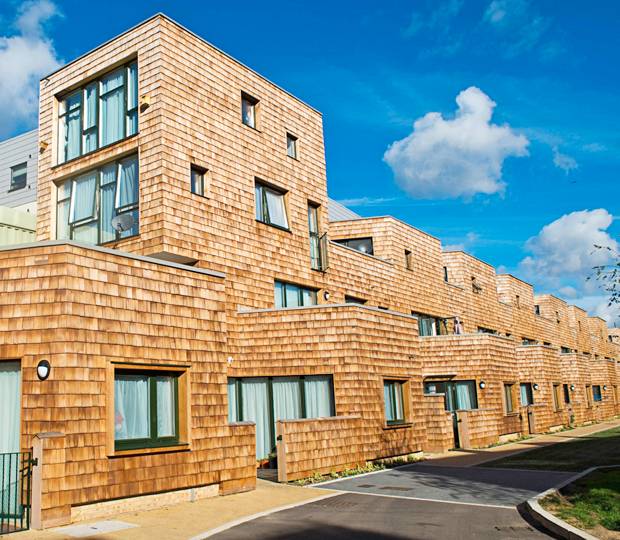 Peter Barber of Peter Barber Architects and member of EXP has just completed a new terrace of nine houses in the heart of what used to be called the Stepney Green Estate, now called Hannibal Road Gardens. 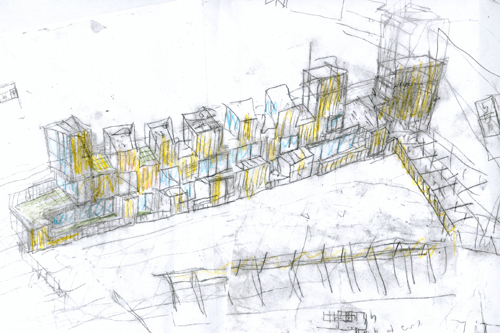 The existing estate is a collection of unremarkable fifties and sixties buildings that produced a typically unrelieved residential urban landscape with many unattractive leftover spaces around them. Barber’s new terrace occupies one of these spaces. 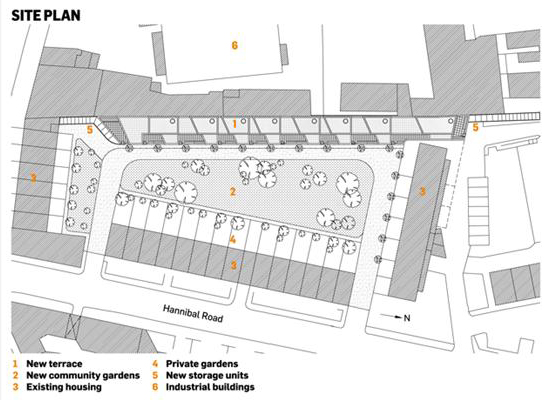 It closes the fourth, west side of an existing courtyard fronted by rickety timber garden sheds and fences at the rear of existing housing blocks. Rather than turning his back on these, Barber thought of his new terrace as an extension to them. He faced it with timber shingles in deference to them, and placed his building hard up against the boundary wall of the estate. This meant that it could have no windows or openings to the west at all. Instead, it has many windows to the east, overlooking the new communal garden.

This transformed what was the back of deteriorating social housing into an active, unified communal space, with a garden as its centre.

The houses are large – between three and seven bedrooms, 50% of which are to be socially rented. 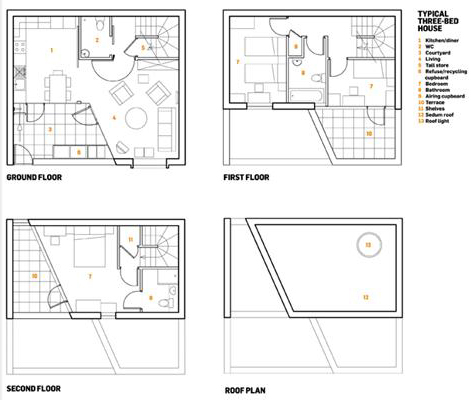 They were designed with large Bengali families where several generations live together in mind. Many of the residents simply moved from one side of the courtyard to the other. The living spaces on the ground floor are accessed through small front courtyard gardens. 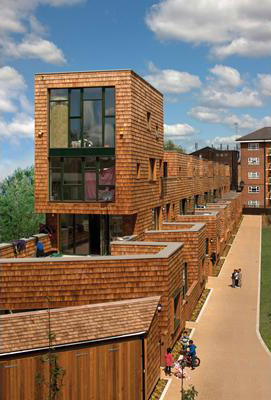 Entry is at ground level, straight into an open-plan living space, which has movable screens to make a separate kitchen if desired. Upstairs bedrooms are reached via a top-lit staircase, and in every house at least two bedrooms have terraces of their own. These outdoor spaces are the key to the character of the buildings, as with all Barber’s work. They act as a backdrop for residents’ individualism and allow the building to come alive with bicycles, clotheslines, potted plants, doormats, childrens’ toys etc. This is in keeping with Barbers’ intention to actively encourage the adaptation of his buildings through inhabitation.

Buildings  come alive, Barber argues, when they are occupied.

The timber shingles used at Hannibal Road Gardens are a departure from the white rendered walls of Barber’s previous work. Here he combines a material associated with rural landscapes and seaside cottages with urban, cubic form, adding texture and character to the building. 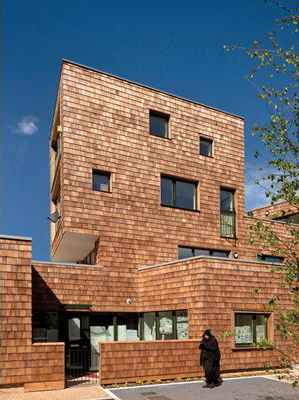 Barber argues that the material will demand less maintenance than a painted building, and, as it weathers, will blend in with its surroundings.Formally the project borrows a great deal from Donnybrook, Barber’s much acclaimed earlier housing project, in its density and combination of terrace and courtyard typologies. It has no corridors, lifts, or shared staircases. Its single aspect terraced units do away with dingy and neglected communal spaces and allow south-east light into the back rooms of the building while shielding them from the view of the industrial sheds and student housing behind.

Kieran Long, in an article in the London Evening Standard on September 12th argued that these well designed affordable homes throw into stark relief the kinds of properties that London’s developers offer for market sale and challenge the views of the current government of the (non)value of social housing to the city.