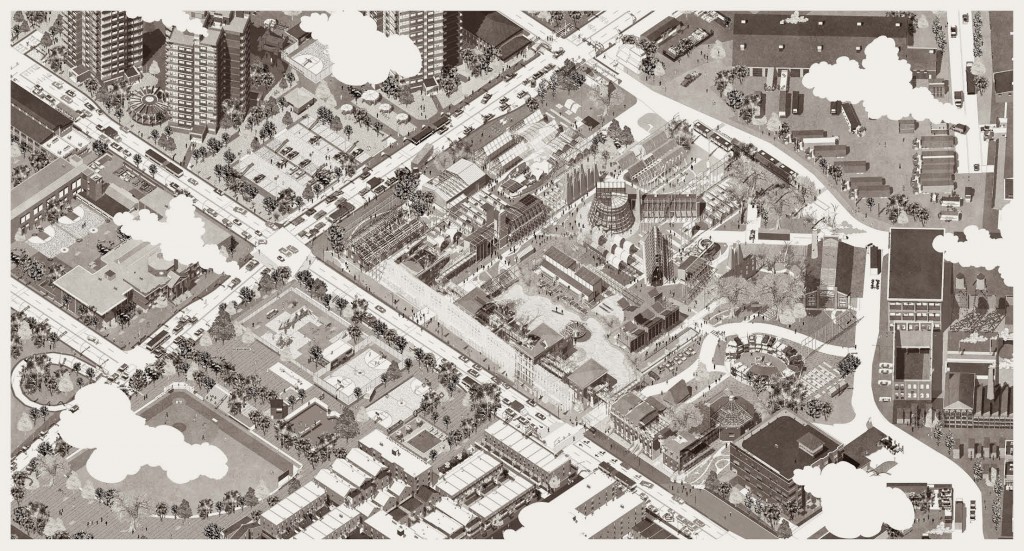 The  RIBA President’s Medals are considered the most prestigious and established awards in architectural education in the world. It is theRIBA’s oldest award, first given in 1836. Since 1984, it has been one of three student awards given by the RIBA – a Bronze Medal to reward design work produced during Part 1, the Silver Medal awarded for work produced at Part 2 and  in 2001, a Dissertation Medal was added.  The aim of the awards is to promote excellence in the study of architecture, to reward talent and to encourage architectural debate worldwide. Each year the RIBA invites approximately 300 schools of architecture from over 65 countries to nominate design projects and dissertations produced by their students. Winners are announced in December at the annual President’s Medals ceremony at the RIBA headquarters in London where the Bronze, Silver and Dissertation Medals are presented to the winners by the RIBA President. 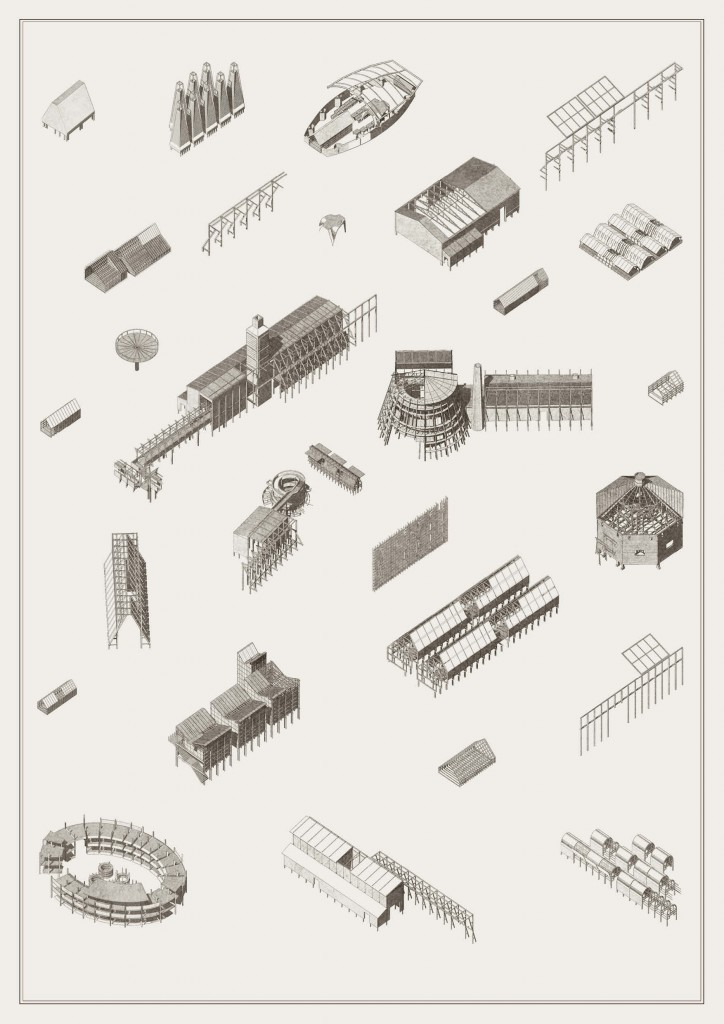 Brooklyn Co-operative is a cluster of re-configured agrarian structures that act as food production and consumption sites in an alternative supermarket proposal for Admiral’s Row. 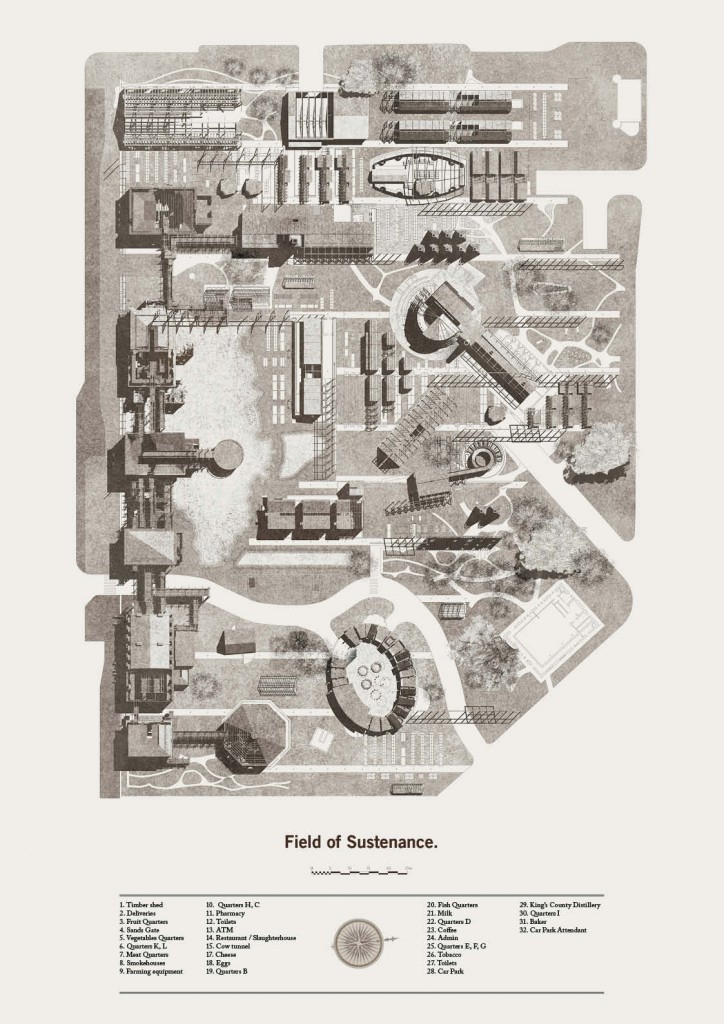 The project is a response to current plans to demolish the row of abandoned houses to build a suburban supermarket. 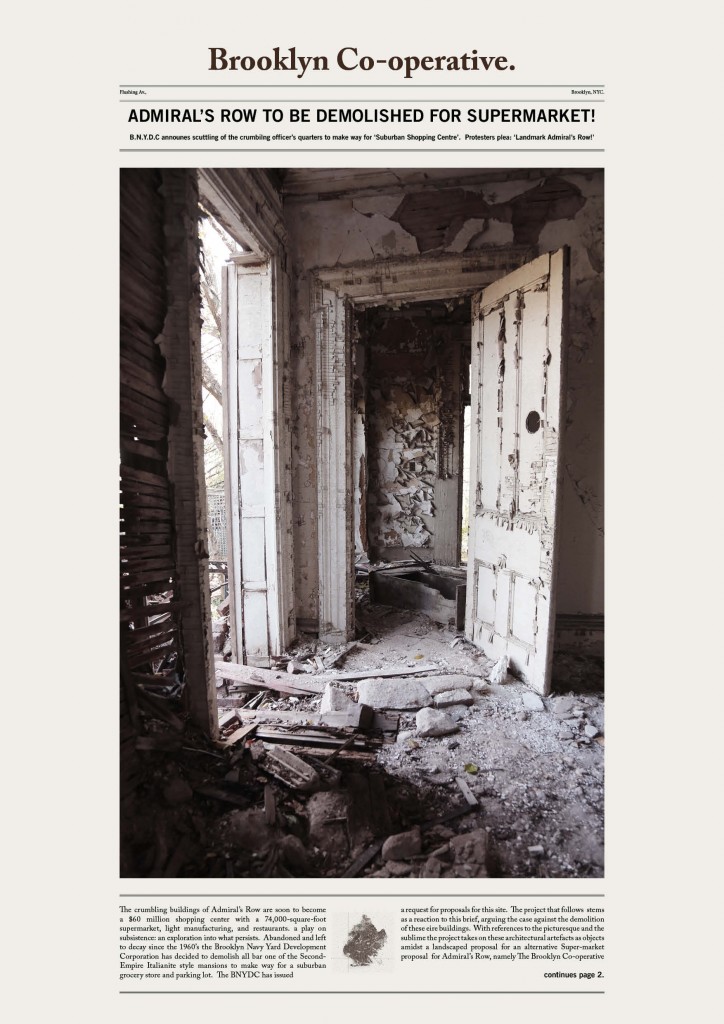 Once home to high ranking naval officers the eleven structures have been left to decay since 1960.

and re-kindle the consumer with the origin of the food produced and promote regional traditions, gastronomic pleasure and the slow pace of life that finds its roots in the Slow Food Movement NY. 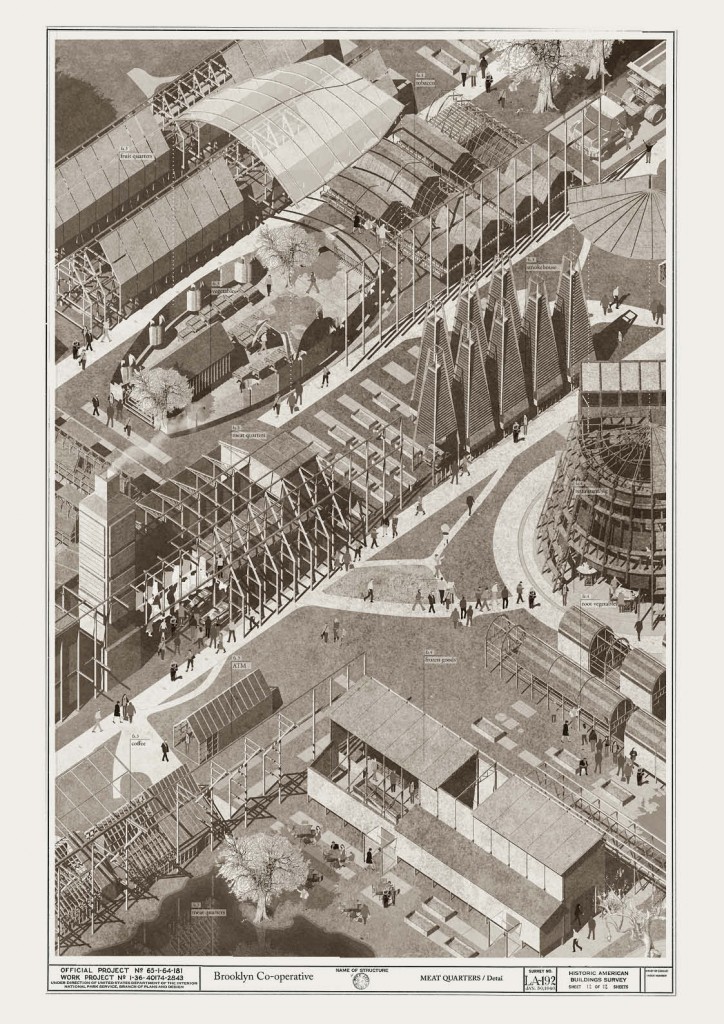 The proposal takes on the link that can exist between the decay of a building coupled with the promise of giving it a new lease of life as it is welcomed into the world of food consumption. The project explores the significance of the collection defined not only through its reinstatement as a memory fragment, but also as a reinvented artefact in a landscape generated in ways that allow the past to resonate into the manifold of the current realities of food production and consumption. 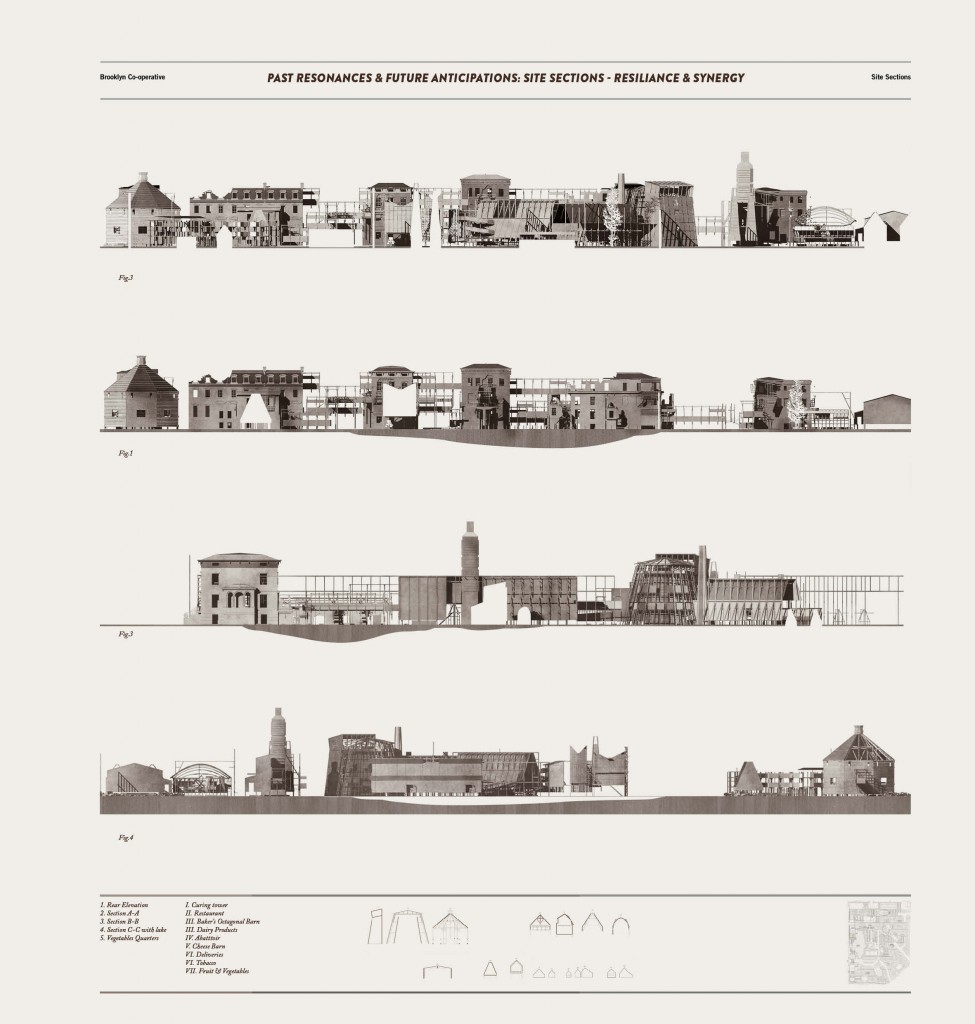 The proposed food co-operative is made up by the symbolic re-configuration of traditional North American Barn structures. 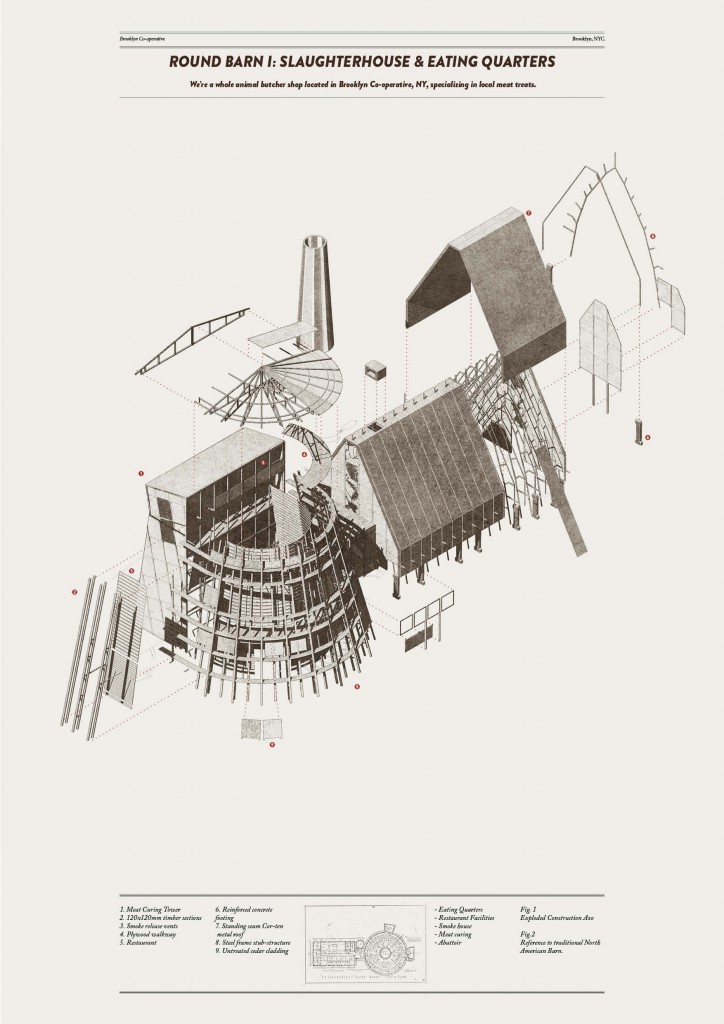 Despite their credentials in times gone by, several among the features of the architectural forms which emerge are endowed with such an air of transitiveness and constrained temporality that, when juxtaposed with the evidently longer lasting, albeit decaying, residences of the Officer’s Quarters, give rise to a deep sense of contrast. 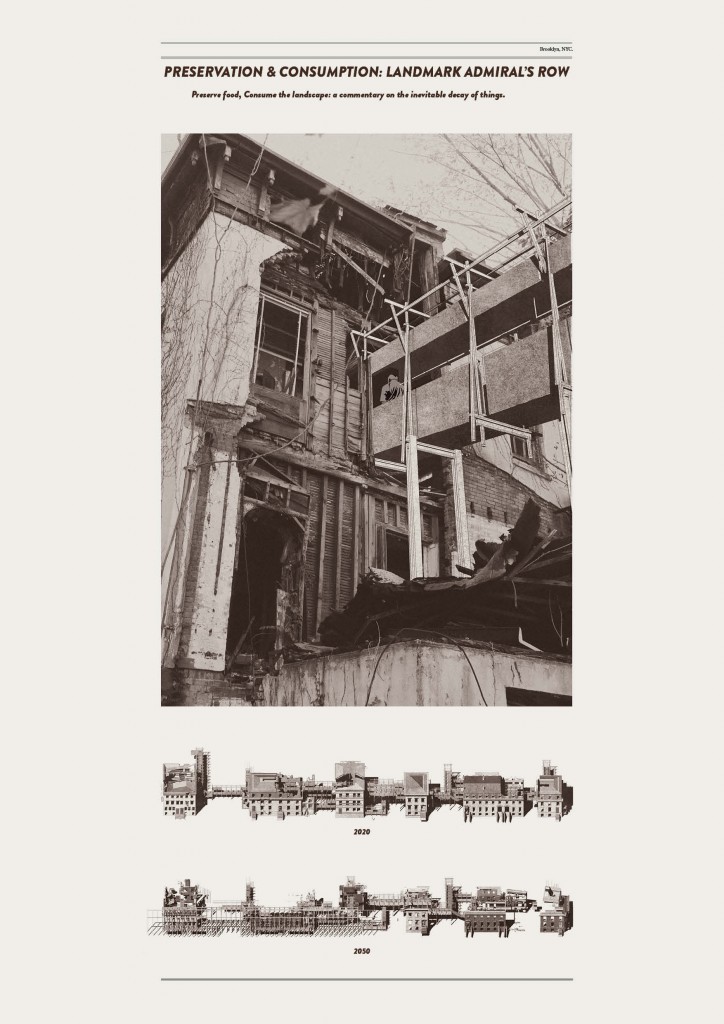 A contrast pregnant with ambiguity as it pays respect to the longevity at the same time as it asserts superior current relevance and functionality. 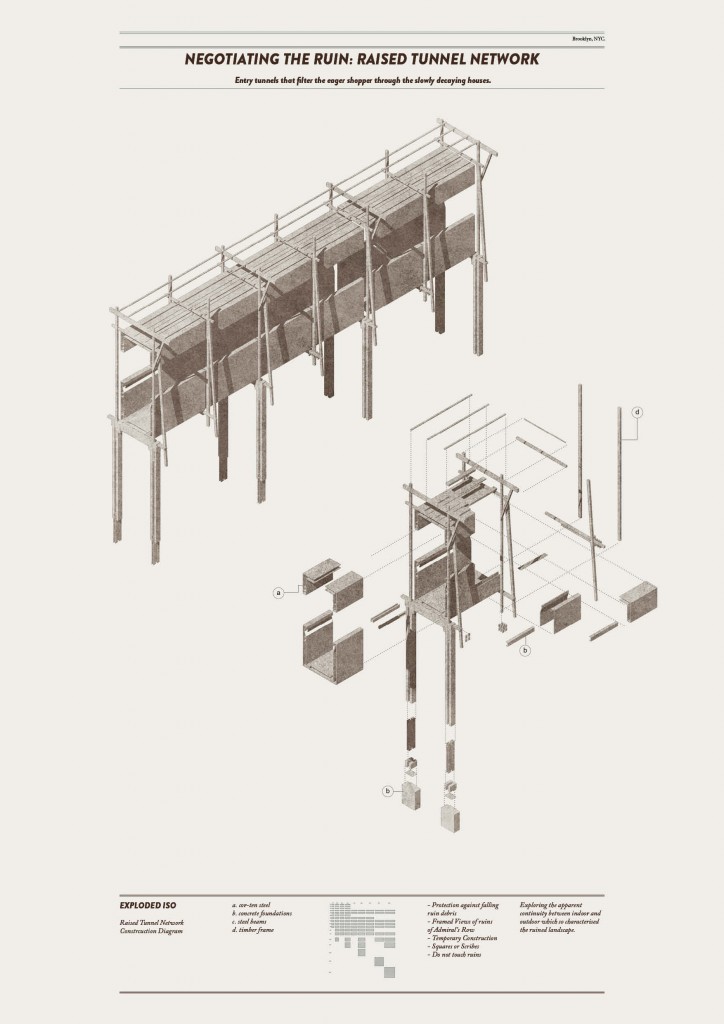 In so doing the new outbuildings act as ghosts of a distant past and function, inter alia, as a symbolic manifestation of the decline of the agrarian landscape. 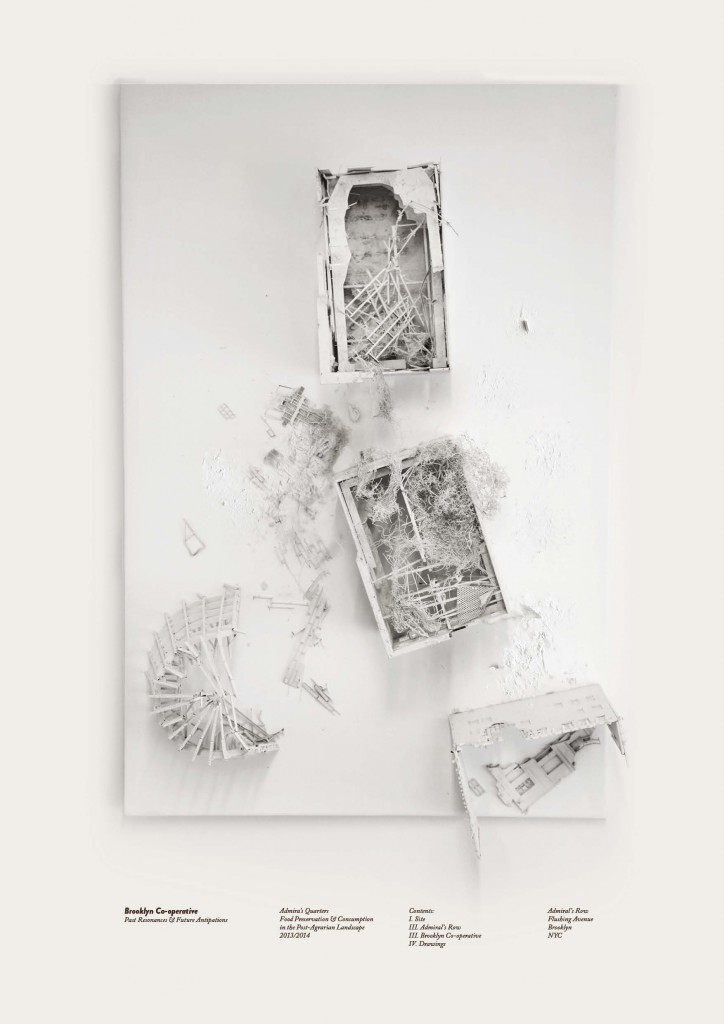 The landscape proposal thus becomes a play on subsistence: an exploration into what persists over what dissipates.

All images by Yannis Halkiopoulos