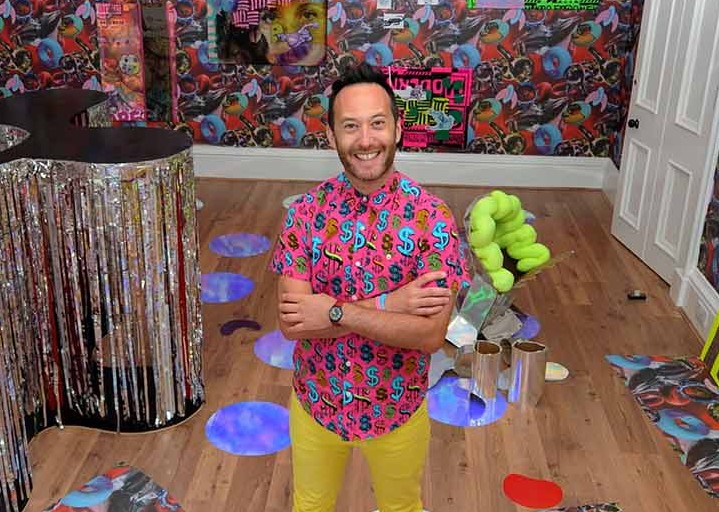 The Department of Architecture is pleased to announce the award of its 2013 AHRC Research Studentship in design/practice-based architectural research to John Walter, an accomplished practicing artist, for his PHD proposal ‘Alien Sex Club.’ This will enable him to undertake three years of full time study towards a PHD at the University and engage with the wider research and teaching and learning communities.

John studied art at the University of Oxford and the Slade School of Fine Art. Since 2000, he has been in a number of one and two person exhibitions, performances and group shows, including the latest solo ‘Rococo Riots’ at VITRINE Gallery in London in 2013.

He has been recipient of a number of scholarships, residencies and awards, including a Sainsbury Scholarship at the British School at Rome (2006-2008). John’s work started in drawing and painting, but his ‘maximalist’ aesthetic soon extended to printmaking, sculpture, installation, performance and costume. He also has a long association with architecture. He worked with Bruce and Will McLean on the experimental primary school they designed for the North Ayrshire Education Department and has taught as a Visiting Lecturer at the AA since 2008. John’s methodology has led to complex and large-scale installations such as ‘The Tarot Garden’, at MEANTIME Project Space in Cheltenham, which brought together painting, installation, artist’s books and performance. Beginning in 2010 with ‘Bar Zsa Zsa’ at Paradise Lost Gallery, he organized a series of bar projects that used hospitality as a mechanism to question the status quo of what an art opening is and how art should be seen.

My work is visually excessive and its appearance initially deterred it from being exhibited alongside the work of others. Over time I have taken responsibility for contextualising it by using my methodology as a curatorial strategy or by working collaboratively with others.

This process of reorganizing and reclassifying the relationship between objects in the world was exemplified by his 2011 curatorial project ‘Two Peacocks’, which transformed Gallery North in Newcastle into a Department Store, as a means of rethinking the group show. The project used architecture as an organisational device for interrogating authorship and the rhetoric of the artist as originator.

John has recently been collaborating with Victoria Watson on ‘SUPREMATECA,’ a four-storey hybrid of architecture and painting designed as a series of portals into another world and is currently working on a moving image project entitled ‘An AIDS Opera’ in collaboration with the UCL research group A Comprehensive Assessment of the Prevention Role of Antiretroviral therapy (CAPRA) to investigate the effect that antiretroviral therapy (ART) has on sexual transmission risk.

My application to work on a PHD is the next stage in my attempt to find a place for my work in the world.

John’s PHD proposal, ‘Alien Sex Club’ aims to problematize HIV-AIDS awareness using research methods from the disciplines of art, architecture and immersive theatre. The project will investigate the relationship between internal, psychophysiological drives, habits of cruising and the interior architecture of the gay sex club. This space is designed to allow for sexual contact with multiple partners through a prolonged stay. A recurring feature is a ‘cruise maze,’ a form of architectural puzzle designed to entertain the brain through a temporary loss of whereabouts. Cruising is a hermetic courtship, the rules of which necessitate that it never blossoms into an enduring relationship. The temporariness of this human contact causes the participant to experience a number of traumas that impact on the self. John suggests that for gay men, cruising re-enacts alienation through role-play, imagination, practice, abandonment, avoidance and dispersal of self. This results in an ego death, which corresponds to an increase of risk. If the architecture of cruising can beintervened in to alter the behaviour of its members then perhaps rates of HIV infection can be reduced.

The PHD will incorporate six key research strands, which will inform a written thesis and an installation. These will use spatial design (‘Invisible Mazes’), language (‘Post Polari’), costume design (‘Exoskeleton’), sculpture (‘Prophylactic’) video and performance (‘Replacement Trance’) and painting (‘Pill Burden’) as modes of practice based research. John’s PHD will contribute to the Experimental Practice (EXP) research group. He will be supervised by Adam Eldridge, Victoria Watson and Francis Ray White (Department of Social and Historical Studies).