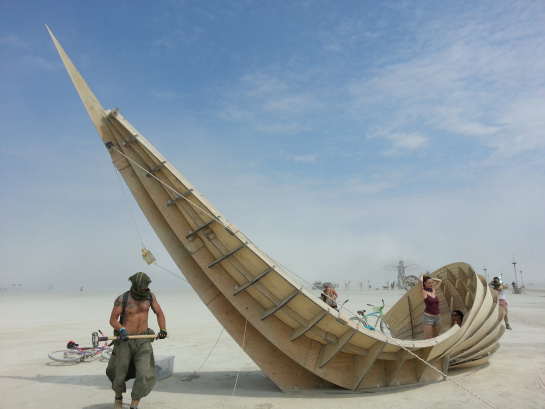 During the past summer, Toby Burgess and  Arthur Mamou-Mani and their students from MArch Studio 10 at the University of Westminster participated in the Burning Man Festival in Black Rock desert, Nevada.

Burning Man is participant-led festival in which activities are initiated by the people attending it. There are around 60,000 ‘burners’ every year, building a giant temporary city in which they live a social experiment, concluding by burning a large sculpture of a man.

What interested Burgess and Mamou-Mani were the 10 principles which guide the ‘burners’: Radical Self-Reliance, Radical Inclusion, Gifting, Leaving No trace, to name a few. These informed the way they ran the studio. The rules helped students understand basic issues of sustainability and to design with playfulness in mind, as all the structures had to be climbable and interactive.

Studio 10 works from the premise that involvement is key to the process of learning. Students are encouraged to get out and build their designs in the real world. The studio starts the year with the study of systems, natural, mathematical and architectural systems of all sort, paired with intense software training in order to build up skills and a set of rules to design a small scale project which they will be able to build during a real event in the summer. Throughout the year, they build large scale prototypes and draw very accurate technical drawings, they are also required to provide a budget and explain how it makes sense within the wider context of the festival. Some students started a crowd-funding campaign to self-finance the projects.

Our ultimate goal is to give them an awareness of entrepreneurship in Architecture and how to initiate projects, as this is for us the best way to fight unemployment in our profession.

The two projects designed and built by their students at Burning Man 2013 were ‘Shipwreck’ by Georgia Rose Collard-Watson and ‘Fractal Cult’ by Thanasis Korras.

‘Fractal Cult’ was derived from an exploration of fractals and ‘Shipwreck’ began by looking at ways to bend and assemble strips of wood together.

The two students both explored these systems before submitting projects with very strong narratives that fitted the burning man philosophy. Thanasis linked his fractal to the symbol of ‘Merkaba’ whereas Georgia told the story of a shipwreck that offered shelter from the dust storms. Once these projects were chosen, the studio partnered with an engineer, Ramboll and started researching for suppliers and fabrication facilities in the USA. 3D files were taken from concept all the way to parametric models for fabrication.

Gantt charts, with every step of the process, from rental of  24ft truck and collection of materials  all the way to demolition were drawn up. One of the main aspects that required a lot of planning was the camp itself. Every meal had to be planned around food that would not perish under the extreme conditions.

The group also found a way to rent all the camp equipment from past burners. On site, the team grew little by little. Blog posts and active social networking online led to students from the Architectural Association, Columbia and UCL joining the team.