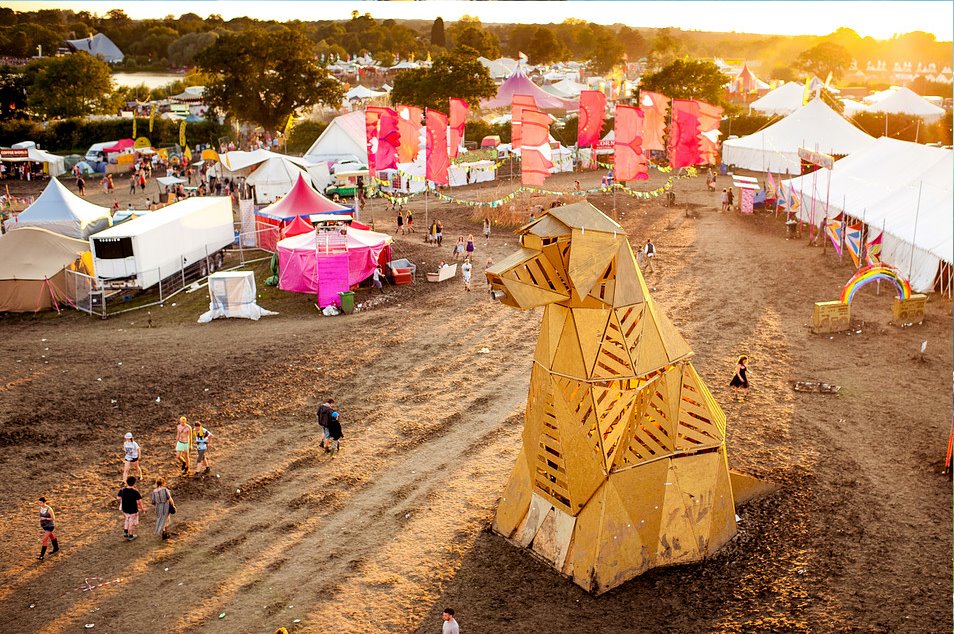 Events, Experimental Practice (EXP)
Lindsay BremnerNovember 26, 2012November 27, 2012
At this year’s summer Secret Garden Party on Abbot’s Ripton Estate in Cambridgeshire, festival goers were invited to pay homage to (wo)man’s best friend, the golden retriever. Responding to the festival’s theme of ‘Standing on Ceremony,’ Roding Projects, a collective of architects,designers and fabricators based in Hackney, created a 9m tall  gilded golden retriever inspired by the scale of giant statues of deities from around the globe. The canine form was carefully devised so that the structure could be prefabricated and dismantled precisely. Over 60 triangular timber panels were cut, then gilded in a workshop in Hackney before they were shipped to the grounds of Abbot’s Ripton Estate where the dog was assembled.
The towering silhoutte watched over its surroundings, part monumnet, part pet, part folly, part signpost for navigating the site. The golden trinagulaed structure was caught gleaming in the sunlight, whilst inside, a periscope allowed visitors to contemplate a long view into the distance across the festival site.
Team members: Nick Wood, Gillian Lambert, Andrew Friend with William Trossel, Geraldine Holland, Laura Smith, Matt Andrews and Ryan Roberts